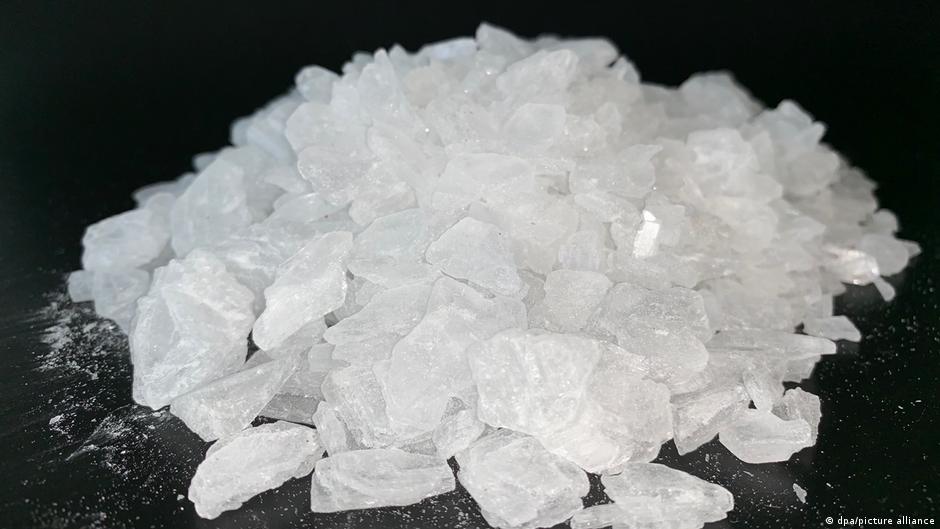 “Ice drug” is one of the forms of methamphetamine. It is a very addictive and powerful stimulant. It is solid in nature and can be used illicitly.

When methamphetamine is allowed to crystallize, it becomes solid and is known as “ ice ” methamphetamine. When the drug does not go through this additional process, it is sold and consumed in the form of a powder or thicker substance.

Methamphetamine ice can look like small pieces of glass. It is quite clear or slightly colored, and each crystal has sharp edges.
This meth ice is pure enough to burn, which is why it is normally smoked. Some users also dissolve the crystal of methamphetamine and inject it, but many drug users still display the stigma of using the drug by injection.

Methamphetamine crystals can be called by many different names, depending on where you are. Here is a list of the most common names: Batu, blade, Cristy, crystal, glass, hot ice, LA glass, LA ice, quartz, shabu, shards, stovetop, super ice, tub, window, meta, chalk.

In Pakistan, ice drug is growing in popularity among young people and wealthy students. However, many families in Pakistan keep the drug addiction of a family member secret because of the norms of society.
Using crystal methamphetamine among people of Pakistan is rising day by day. Many specialists and researchers found that a considerable percentage of drug addicts comprises students, educated families, and upper-class families.
According to the country’s anti-narcotic forces, about 27 million people struggle with drug abuse in Pakistan.

As mentioned, families feel ashamed to talk about drug addiction and keep it a secret; there is very little data available to assist with the treatment compared to the total percentage of addicts in Pakistan. However, this is not a good sign, and it usually results in increasing the ratio of drug addiction.

Ice is physically and mentally harmful?

Those who consume ice can quickly become addicted. One report estimates that 80% of consumers become addicted. It is common for meth addicts to lose their ability to care for themselves, children, or others for whom they are responsible. The chemical itself is corrosive and harmful.
Consumption can cause inflammation of the heart and can severely damage teeth, requiring complete replacement with prosthetics.
Methamphetamine users may hallucinate that insects are crawling under their skin and crawling to try to get them out, resulting in injuries to the face or other parts of their bodies.
Consuming methamphetamine can also damage blood vessels, due to its stimulating effect that increases blood pressure and body temperature. This can contribute to strokes.
A methamphetamine is someone who is addicted is regularly distrustful and may, with weighty use, experience the ill effects of maniacal scenes. This can certainly lead to a person getting in trouble with the law. The drug can also cause tremors, seizures, aggressive or violent behavior, often directed at others in the same household.

A study of methamphetamine users who were admitted to hospitals in Australia revealed that they were more agitated, aggressive, and violent than other types of drug users. They were significantly less alert and cooperative, and the police were much more likely to accompany them when they were taken to the hospital.

Because a person who consumes ice quickly develops a tolerance, his dose can also increase rapidly, leading directly to addiction.

What does a person look like when on the drug ice?

They will have dilated pupils, can breathe faster than normal, and may feel sweaty and complain of being hot. They rarely, if ever, eat. They may usually suffer from dizziness, headache, nausea. As long as they have meth on hand, they won’t sleep until they collapse, which can happen in a matter of days, or as long as a week – sooner if they run out of the drug. When they collapse, they can sleep for a long period and feel exhausted and depressed when they wake up. They are likely to crave more drugs right now, to get rid of fatigue and depression.

While high, they are likely to appear nervous, talkative, and active. In more serious situations of heavy drug use, they may manifest visual hallucinations.

In your belongings, you may find small plastic bags with traces of the ice drug and they may have narrow glass tubes with black residue in them.

The most effective treatments consider for ice drug addiction are behavioral therapies, such as contingency management and cognitive-behavioral interventions. For example, the Matrix Model — a far-reaching 16-week conduct treatment strategy that normally joins family instruction, conduct treatment, 12-venture support, individual treatment, drug testing, and consolation to take part in non-drug-related exercises — has demonstrated compelling in lessening methamphetamine misuse. Contingency management interventions, which provide tangible incentives in exchange for participating in treatment and maintaining abstinence, have also been shown to be effective. The Motivational Incentives for Enhancing Drug Abuse Recovery ( FEAR) method, based on incentives to promote abstinence from cocaine and methamphetamine, has been shown to be effective among those who abuse methamphetamine through drug abuse.

In spite of the fact that prescriptions have been demonstrated to be powerful in treating some substance use problems, there are as of now no meds that neutralize the particular impacts of methamphetamine or that drag out withdrawal and lessen methamphetamine maltreatment by an individual dependent on the medication.

Islamabad Psychiatric Clinic and Rehabilitation Center offers you the best drug addiction treatments and rehabilitation centers in Islamabad. A variety of substance abuse-based treatments is available here. Our vision is to provide our patients with care and help restore their abilities and functions, making them productive and beneficial for their families and society. Our CEO Dr. Shahid Akhtar has worked in this field for 30 years. He has been helping people to get out of addictions for many years.